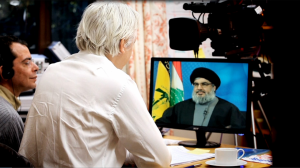 The Hezbollah party is currently a member of the Lebanese government. Its military wing has been described as “the most proficient guerrilla organisation in the world”. Under Nasrallah’s leadership, Hezbollah presided over the withdrawal of Israeli troops from South Lebanon in 2000, and the tactical victory against Israel in the war of Summer 2006. Sayyed Nasrallah has been named among the world’s most influential people by Time Magazine and Newsweek. His fame crosses sectarian divides and national borders, and he is revered and reviled by millions of people in the Middle East and all over the world.

This is the first English-language interview with Sayyed Hassan Nasrallah for over a decade. As turmoil spreads through the Middle East, Julian Assange interrogates Hassan Nasrallah on the hard issues, including Hezbollah’s stance on the conflict in Syria. Other topics covered include the relationship between Hezbollah’s media machine and military strategy, and the role of  in politics and in everyday life. Assange engages with the frank views of a human Nasrallah, ordinarily portrayed either as demon or hero by the Western, Arab and global media.

Communicating via satellite link, both host and guest participate in the conversation from secret locations: Julian Assange from his temporary home in the English countryside, where he has been detained for 500 days without charge; Hassan Nasrallah, from a Lebanese Hezbollah stronghold, where he goes about his work under continual fear of assassination at the hands of state and non-state actors.